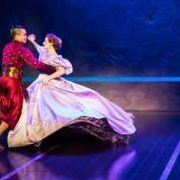 Last night’s performance of The King and I was a classic Broadway cast production of a Rogers and Hammerstein musical.  There are no surprises – this is the original stage version, as far as I can tell.  So if you love this musical, be assured you will appreciate this production. This performance was mostly what you would expect from this caliber of production, in terms of top-notch acting, singing, and all the rest. A friend who attended with me especially appreciated the beautiful costuming and sets. There was a small problem with spotlights being too spotlight-y at a couple of points, but other than that the lighting was also beautiful in how it worked with and enhanced the scenery. The most noticeable problem for me was some sound issue that resulted in the singers occasionally sounding overly nasally, and being consistently unable to deliver their top-volume and pitch notes without them getting swallowed up – “belt it out” portions of the songs frequently turned into whispers.  But since that happened to every singer, it must have been some technical glitch which I would presume would not be an issue for future performances. And my friend said she didn’t even notice it, so rest assured it will probably not spoil your appreciation of the show.

For those unfamiliar with the show, it is set in the mid 1800’s in Thailand, where an Englishwoman goes to be teacher to the children of the king (who has many wives and therefore many children). The main action is between the teacher and the king, who clash over Eastern versus Western ideals, but eventually come to respect and admire each other. It touches on issues of sexism, racism, and imperialism, but (as most R&H musicals) in a mostly comedic way. Some of these old musicals are being remade these days with more attention to modern views on these social subjects, but this is not one of them. At moments, this gave me pause, such as when the king’s inspection of his new “present” (a young woman) – as one might inspect a new piece of furniture – is played for laughs. The rest of the audience just rolled with it, however, and that’s what you need to do if you plan to see this show.

Finally, I’d like to note the performances of the children, who were adorable, amusing, and delightful, and the cast of the “ballet”, which, oddly, was always my least favorite part of the movie version of this show.  In The King and I, the “ballet” scene is a Thai version of Uncle Tom’s Cabin (here called “Small House of Uncle Thomas”). Perhaps my tastes have matured, but I also think the dancers and choral singers did an especially fine job, and it was completely enchanting.

DEAL ALERT: Student and Educator Rush Available! 2 tickets per valid student or educator ID. $25 per ticket, cash only. Available at the box office two hours prior to showtime. Subject to availability.

REVIEW: We Are Proud to Present