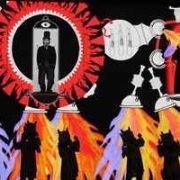 In the spring of 2014, The Minnesota Opera introduced its production of Mozart’s Lulu, oder Die Zauberflöte (The Magic Flute), a stunningly brilliant reinterpretation of the famous 18th Century opera.  The creative team behind this show took the story and the visuals to a place few could ever have imagined.  It was a smash hit so they brought it back for 2015.


As I wrote of my impressions last year:

The first thing that you will notice about this opera is that, rather than set up a traditional three-walled set with props and furniture, director Barrie Kosky and the group 1927 (that’s their name) built a two-story wall packed with trap doors through which the performers enter and exit. The wall serves as the screen for an elaborately animated projection that is superimposed over the performers, who interact with the images through pantomime and careful choreography to brilliant effect. The animation takes inspiration from fairy tales and silent movies and 70s psychedelic cartoons. It’s like the brainchild of Mother Goose, Buster Keaton, Fritz Lang, Terry Gilliam, Charles Addams and the Coen Brothers, if they all got together and smoked something funky before getting down to business. If all this sounds like a giant distraction from the music, trust me, it is not. While there are certainly scenes that are mesmerizing, you will not for a moment forget that this is a Mozart opera and there are world-class performers delivering awe-inspiring aria after aria.

The show was, unsurprisingly, a massive hit, bringing in over $1 million in revenue. It was so successful, they’re bringing it back to give audiences another chance to fall in love with the hapless Papageno, the noble Tamino, and the beautiful Pamina, all over again. We attended the social media preview night during the dress rehearsal. It’s just as good as I remember it, although it’s sometimes hard to get the full effect of a powerful scene when the performers are marking to save their voices for the rest of the run. It’s a tradeoff for getting in for free, but I would definitely see it again just for the music. There are rocket deals available, but hurry, because I’m certain this show will sell out again.

Third Thursday: The Art of Influence
Scroll to top