Blog - Latest News
You are here: Home1 / REVIEW: The Pirates of Penzance 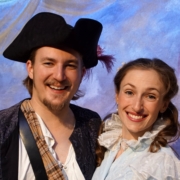 The Gilbert and Sullivan Very Light Opera Company production of The Pirates of Penzance is simply delightful!

One of Gilbert and Sullivan’s most popular operettas, The Pirates of Penzance tells the story of Frederic, who was apprenticed, as a child, to a band of tenderhearted, orphaned pirates by his nurse who, being hard of hearing, had mistaken her master’s instructions to apprentice the boy to a pilot.  Frederic, upon completing his 21st year, rejoices that he has fulfilled his indentures and is now free to return to respectable society.  It turns out, however, that he was born on February 29th in leap year, and he remains apprenticed to the pirates until his 21st birthday.  By the end of the opera, the pirates, a Major General who knows nothing of military strategy, his large family of beautiful, but unwed daughters, and the timid constabulary all contribute to a cacophony that can be silenced only by Queen Victoria’s name.

Superb vocals and razor-sharp comedic timing combine for a rollicking good time. Walking into the cozy Howard Conn Fine Arts Center theater, you wouldn’t believe they can fit the full cast onto the tiny stage or that there’s a live orchestra tucked below in the pit, but both are true!  Coming up on its 143rd anniversary, a show like Penzance can still draw laughs with its timeless witty banter, aided by skilled casting and clever direction. I enjoyed the chance to introduce my daughter to one of my favorite musicals, although a fair amount of the still-true satire went over her head.  She nevertheless enjoyed the lovely voice of Mabel, played by Anna Maher, as well as the elaborate and elegant costumes.  I couldn’t help noticing that the orchestra seemed a bit out of tune from time to time, but it wasn’t enough to sink the production.  Make time to see this show before the run ends or you risk having to wait another 9 or 10 years before it returns to the lineup of the GSVLOC’s repertoire!  Consider it your duty!!

The Pirates of Penzance is at the Howard Conn Fine Arts Center in Minneapolis through November 20, 2022. Tickets are $28 for adults, $18 for kids under 12.

B1G1 at My Burger this week