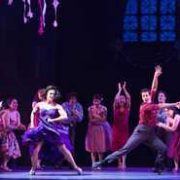 What are the elements for a perfect musical production?  A lot has to come together, from the acting to the singing, the dancing to the costumes, the score to the set, the casting to the choreography, the lighting, the orchestra, the crew, the list goes on–you need everyone to be absolutely on their game.

Before a scene in the second act of The Ordway’s new production of West Side Story, after moving a bed onto the stage, the grips didn’t crouch and scurry away out of sight; instead, they actually danced off the stage.  That two-second flair tells you all you need to know about the energy and charisma that permeates the entire production, running now through April 16.  Hosting a cast of extremely talented actors from around the country, including the Twin Cities’ own Tyler Michaels in the role of Tony, the performances were seamless from start to finish.  The only thing brighter than Michaels’s thousand-watt smile was the timbre of his voice as Tony tells the world about meeting a girl named Maria.

West Side Story is one of my all-time favorite musicals, and judging by the size of the crowd, I’m not alone.  There was not a single moment during the two-hour-and-forty-minute run time that I was able to think of any adjective other than simply, “perfect.”  I would go back every night if I could. Once you see it–and you truly must–you’ll understand why.

West Side Story is at the Ordway Theater through April 16, 2017. Click here for tickets. To learn more about the Ordway’s student rush ticket program, click here.