Blog - Latest News
You are here: Home1 / REVIEW: What the Elf? 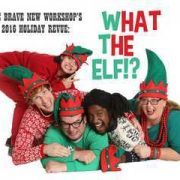 Brave New Workshop has been presenting its Christmas Revue for 58 years now.  You would think that by now, jokes about drunken, egg nog-fueled holiday parties would be old and stale, but the brilliant minds at BNW always find new depths of comedy gold to mine year after year.  The 2016 show is no exception.  For an election year where family tension is running at DefCon 1, a two-hour run of hilarious sketches poking fun at racial disparities, politically-correct seasonal songs, and musical tribute albums is a welcome relief valve.  From the Nativity to the Guthrie’s A Christmas Carol, nothing is sacred, and nothing is off-limits.  Speaking of relief valves, get ready for a sketch so irreverent and tightly packed with jokes, you’ll wish they bar stocked an oxygen tank along with the collection of holiday-themed cocktails like the (rufee-free?) Baby It’s Cold Out-Cider.  What more could you really ask for this Christmas?

Mercilessly funny, What the Elf is at The Brave New Workshop through January 28, 2017.  Discount ticket opportunities are available.

Discount tickets: What the Elf?

REVIEW: The Guthrie’s A Christmas Carol
Scroll to top