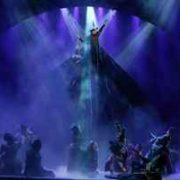 Last evening was my third time seeing Wicked, a look at the Land of Oz from a different angle.  The story of Wicked and the misunderstood Wicked Witch of the West now seems as classic as the original story of Dorothy and the Wizard of Oz. The national tour of Wicked visits the Twin Cities on a regular basis and, from what I can tell, they haven’t altered the production at all since the last time it was here. The compelling story, the quirks, the vocal execution, they all remain consistent with prior productions. They clearly have it all figured out.

Wicked has run consistently since it first debuted on Broadway in 2003. You would think that after all these years, the audience would be ready for some updates or tweaks, but that’s clearly far from the case.  The story, which is based on Gregory Maguire’s 1995 novel “Wicked: The Life and Times of the Wicked Witch of the West,” tells of a passionate political outsider fighting against a corrupt government that exploits fears about Oz’s minority Animal community to increase its grip on power.  The musical skims over these references as much as it can, which is probably for the best, since it could quickly spin out of control and descend into an overheated, political witch hunt.  Instead, the show maintains its focus on the complicated relationship between the two Witches of Oz and their competition for the love of a good-looking prince.  It’s a little trite, but that’s show business.

The Orpheum Theatre was packed last night and everyone, including myself, thoroughly enjoyed the performance.  Wicked somehow defies not only gravity, but the odds in that it’s so satisfying to see over and over.  This no doubt explains why it has climbed to #9 of the longest running Broadway shows and shows no signs of stopping!  Ultimately, it’s all about the music, and there were countless moments in the show that gave me goosebumps to the same degree they did in prior productions.  I clearly wasn’t alone in that experience, as there were more than a few numbers followed by such boisterous applause that would usually be saved only for the finale.  The show runs now through May 14.  Tickets will go fast, but a public lottery will be held for $25 seats each night.  So, if you’re a longtime fan or have never seen the show before, you will almost certainly understand why Wicked remains ever so Popular!

WIN: Vaddey Ratner’s Music of the Ghosts
Scroll to top