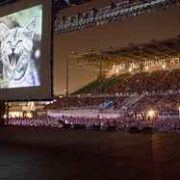 “Proof that cats really do rule everything around us.” —Timeout New York

The fourth showcase features a new selection of videos curated by Will Braden, the creator of the Henri Le Chat Noir videos and recipient of the festival’s first Golden Kitty (People’s Choice) Award. Film critic Roger Ebert called Henri 2, Paw De Deux “the best Internet cat video ever made.” The new reel will feature approximately 100 cat videos culled from nominations by the public in the categories of Comedy, Drama, Animated, Musical, Action, Vintage, and Documentary.

This year’s event is hosted by radio personality Barb Abney of Go 96. A forever fan of cats, Abney was voted Best Radio Personality in the City Pages Best of the Twin Cities Readers’ Choice poll.

The Wellness® TruFood Wagon® will also be at the festival! Pet parents will be able to pick up free samples of Wellness TruFood recipes, spin an interactive prize wheel to learn more about TruFood ingredients and more. Pet parents can enter to win a year’s supply of TruFood by having their pet’s photo taken with the on-site TruFood Watercolor App, which turns photographs into beautiful watercolor illustrations.

Stay tuned to @phenoMNaltc on twitter as I will be live blogging this event!

45% off at Hot Indian Foods