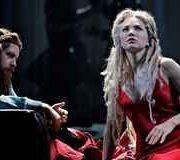 Did you ever think about “The Little Mermaid” and say to yourself, I like where this is going, but it would be a lot better if everyone was miserable in the end?   If so, Antonín Dvořák’s popular opera, Rusalka, is just the thing for you!  Featuring a talented cast, sumptuous set design, and an operatic score that is immediately recognizable as a product of the renowned Czech composer.

Rusalka tells the tale of a water sprite princess who longs to become human after falling in love with a human prince. After making a deal with the local witch, Rusalka finds her prince and gets engaged. Unfortunately, a foreign princess shows up at the engagement party and seduces the prince away from Rusalka, only to be repulsed by him for being the sort of guy who dumps his fiance for some girl in an absurdly large evening gown. When told she can get her old life back if she kills the prince who so wantonly betrayed her, Rusalka instead chooses to suffer eternal torment as an angel of death, pulling people to their deaths from the bottom of a lake. As if things couldn’t get any worse, the prince seeks out Rusalka and asks for a kiss, knowing that doing so will result in his death. Rusalka complies, killing her lover in the process, but not in the way that would restore her to being a sprite, so she returns to her lair alone .  It’s as if Cormack McCarthy and the Coen brothers got together to remake Mother Goose: by the end, everyone’s dead or enterally damned.

DEAL ALERT: The show is sold out, but for a limited time, you can join the Minnesota Opera’s young professionals group for half price (a mere $25) from the Minnesota Opera’s website (select the Preview Night option from the drop-down menu at checkout) for access to steeply discounted tickets, previews and after-parties, and more.