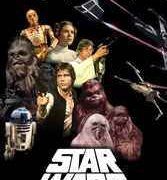 It’s that time of year again for the Toys For Tots Screening of the Star Wars Holiday Special (SWHS) at the Bryant Lake Bowl Theater.

A long time ago in living rooms not too far away, the SWHS aired on CBS once…and never again. For those of you lucky enough to have missed that broadcast, a brief history lesson: SWHS depicts the saga of Han Solo trying to get his Wookiee companion, Chewbacca, back to his wife, father and son on their home planet Kashyyyk to celebrate Life Day. This involves robed Wookiees gathering around a tree listening to Princess Leia sing, Bea Arthur slinging drinks in the cantina and Diahann Carroll seducing an aging Wookiee through a virtual reality headset.

Please join us for the craziest holiday celebration Minneapolis has to offer. Have your photo taken with costumed characters from the Star Wars universe and hear the letter of apology from credited SWHS writer Pat Proft! Enjoy dinner and drinks from Bryant Lake Bowl and watch Jefferson Starship sing into a glowing, hot pink…thing! Pick up the limited edition, soon to be revealed poster by Clinton Lugert of THEY design! Bring an unwrapped toy donation and help us create a happy holiday season for the tots.