Blog - Latest News
You are here: Home1 / We Build Excitement 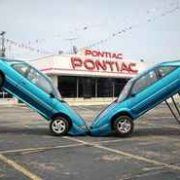 Perhaps I’m biased because my first car was a two toned, Pontiac 6000, but this exhibition sounds wicked cool!

The Pontiac Motor Division was phased out in 2010 as a requirement of GM’s Chapter 11 restructuring. This dissolution of Pontiac came quietly, occurring without celebration or protest. Pontiac’s end was publicly accepted as a necessary adjustment in a desperate time, an initial and obvious step in the resuscitation of America’s flailing auto industry. The decision to close Pontiac was almost automatic. And with this decision came the sudden loss of one of America’s most interesting and long running car companies.

The charge of the automotive designer is to create physical objects that both forecast and preempt contemporary notions of self-identity. In this area, Pontiac was both an industry leader and a company prone to marketing blunders and social miscalculations.  Click here to read more…

Groovin in the Garden