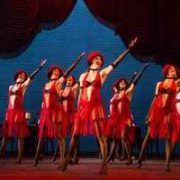 Bullets Over Broadway is the complete package when it comes to nationally-touring musicals.  It features a plot with intrigue and witty humor intertwined with spectacular choreography and first-rate vocal talent.  The set, props, costumes, and story all lend to a very overall glamorous production.  The story is one of a writer in 1920s New York City hoping to get his show produced.  He accepts an offer for backing from a notorious mobster, who only requests that his girlfriend receive a role.  Needless to say, she’s not an amazing actress and, of course, hilarity ensues.

I can’t remember the last time that I was so impressed by the dancing and choreography of a musical, but this one was fantastic.  The high energy dance numbers really kept the show moving and added an element of awe.  If you’re at all a fan of Gene Kelly style musicals, this one is a must-see for the dance alone.  If you’re put off by that last comment and think that Gene Kelly style musicals must mean old and dated, please know that Bullets Over Broadway is far from dated, even if set in the 1920s! The humor is modern and the story is relatable, even in this day.

This show delivers a lot of bang-for-your-buck (pun intended).  Go see it, especially since discount tickets are available.

Bullets Over Broadway is at The Ordway though April 17, 2016.