Blog - Latest News
You are here: Home1 / REVIEW: The Book of Mormon 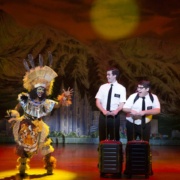 The Book of Mormon is back in the Twin Cities! I’d seen this show two times previously and wondered if I would enjoy seeing it for a third time, particularly after following Hamilton, which I found to be very new, fresh and exciting.   I’m pleased to report that even after all of these years, The Book of Mormon still has what it takes to me laugh out loud and bop in my seat.

The Book of Mormon tells the story of two Mormon missionaries, overachiever Elder Price (Kevin Clay) and socially awkward Elder Cunningham (Connor Peirson) sent to Uganda.  The people of Uganda, dealing with AIDS, poverty, rebel forces and threats of genital mutilation initially have a hard time understanding how the Mormon Church can help with their problems. Faced with failure, Elder Price has a breakdown thus leaving Elder Cunningham to the task of converting the locals, which he successfully accomplishes after taking some creative freedom in discussing the teachings of the Mormon Church. The Book of Mormon is outlandish, in the best possible way.

The Book of Mormon is solid entertainment but lacked some of what made Hamilton so spectacular. In particular, I found many of the vocalists talented but leaving a bit to be desired. The performances also felt routine. Like most touring shows, it felt like the performers were going through the motions, whereas Hamilton shined in that it appeared the cast believed it was their first and last show.  If you were going to pool your money for one show this year, Hamilton would have been it but The Book of Mormon may be a terrific runner up and will certainly deliver an enjoyable evening out.

The Book of Mormon is at the Orpheum Theatre in Minneapolis through November 18, 2018.  Regularly priced tickets start at $39.

DEAL ALERT 1: Tickets start at $25 via the ticket lottery.