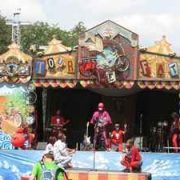 This year marks the 16th season for Tour de Fat, which will travel to 10 cities across the U.S. These day-long festivities are free in every city, but the proceeds from beer sales go to local non-profits.

Since its inception, Tour de Fat has raised more than $3 million, and raised half-a-million dollars last year alone. The events kick off with a costumed bicycle parade that winds through city streets, ending in a city park. That’s when eclectic entertainment takes over from musical acts to yo-yo performers, bike contests and even vaudeville acts. This year will also include some brewing education and feature a “Bicycle Revival” to inspire festival-goers to believe in the power of two-wheeled transportation.